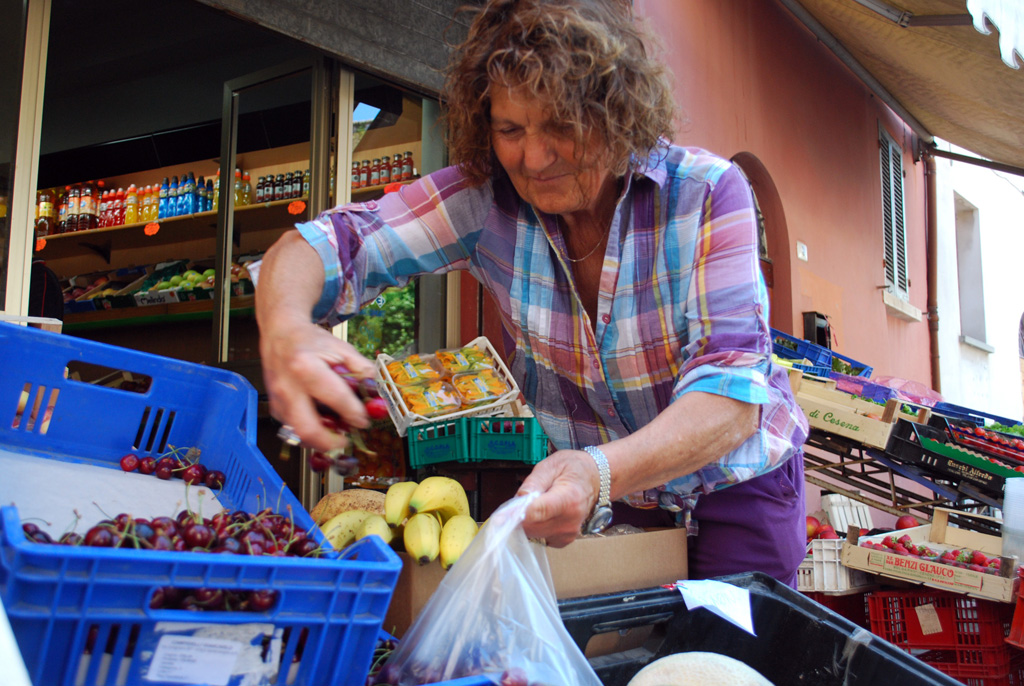 Carla Santini scoops cherries for a customer at her fruit and vegetable stand in Cagli, Italy on June 17, 2013. Photo by Jacelyn Keys / Gonzaga in Cagli 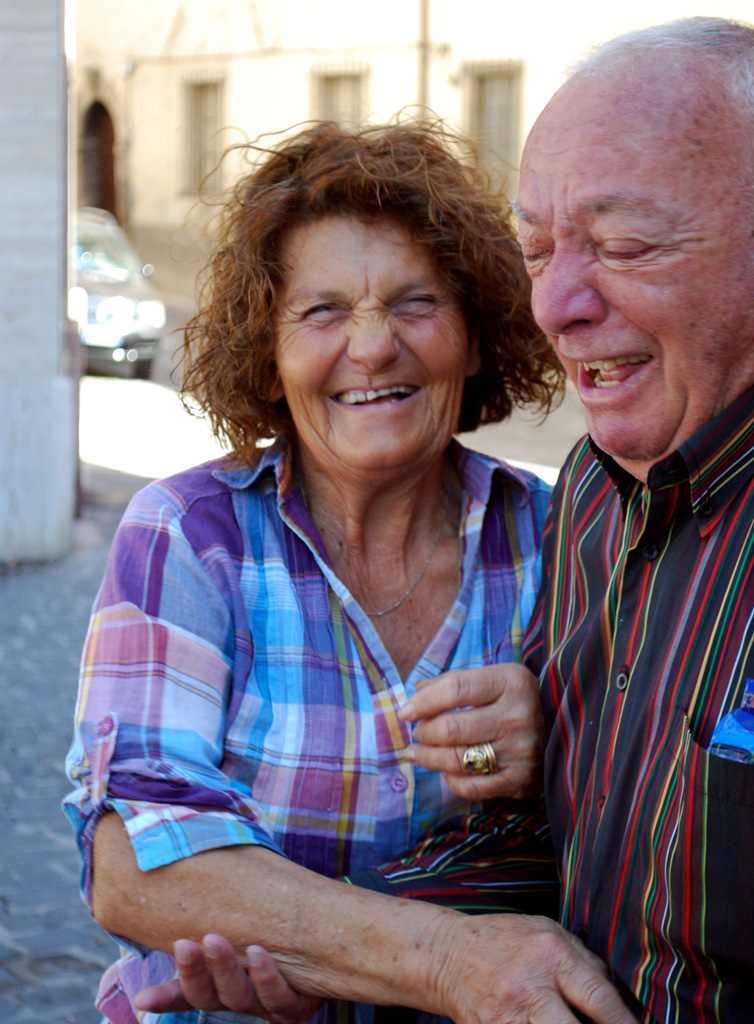 Carla Santini shares a moment with her husband, Bio Magnoni, outside their fruit and vegetable stand in Cagli, Italy on June 17, 2013. Photo by Jacelyn Keys / Gonzaga in Cagli 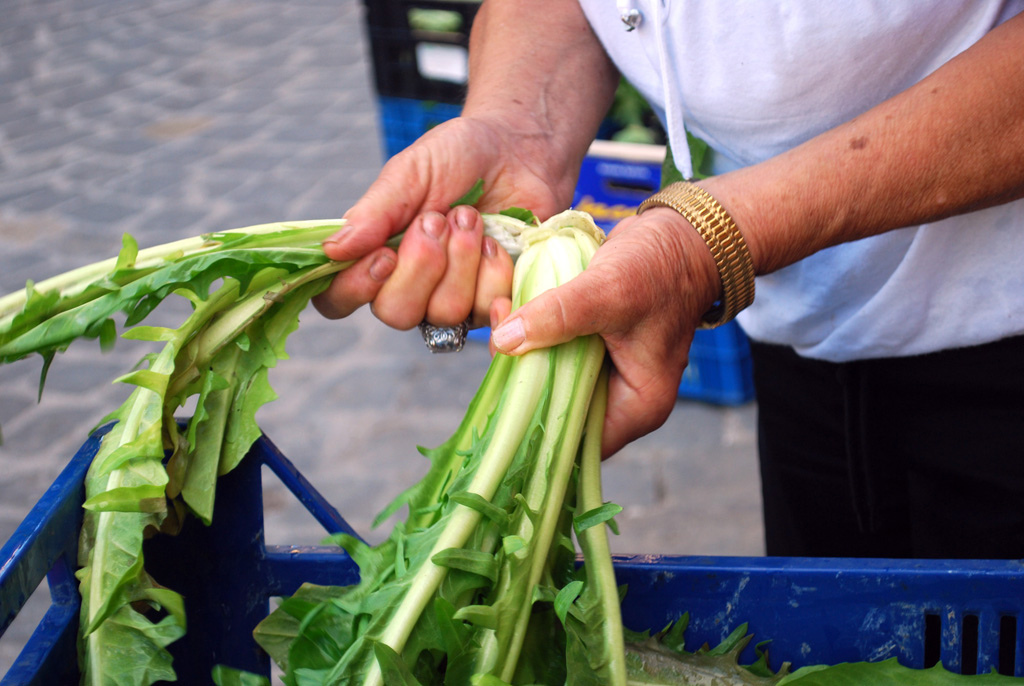 Carla Santini cleans up some produce before she places it in her carefully orchestrated display in Cagli, Italy on June 20, 2013. Photo by Jacleyn Keys / Gonzaga in Cagli 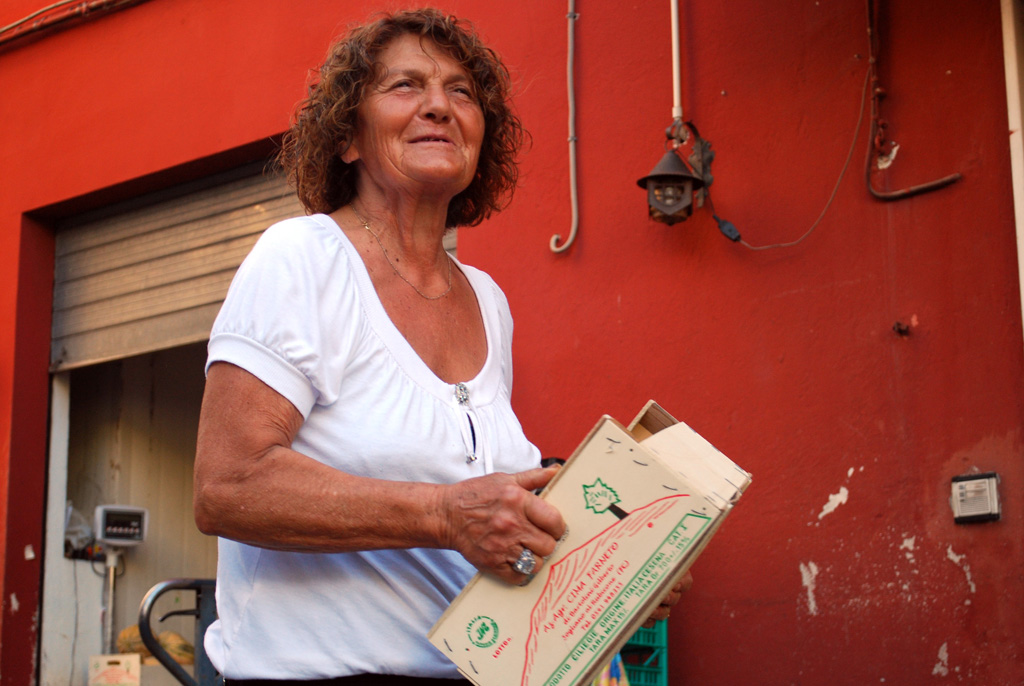 Carla Santini prepares her fruit and vegetable market for a day of serving the people of Cagli, Italy on June 20, 2013. Photo by Jacelyn Keys / Gonzga in Cagli

Carla Santini organizes her displays of fruits and vegetables in Cagli, Italy on June 20, 2013. Photo by Jacelyn Keys / Gonzaga in Cagli 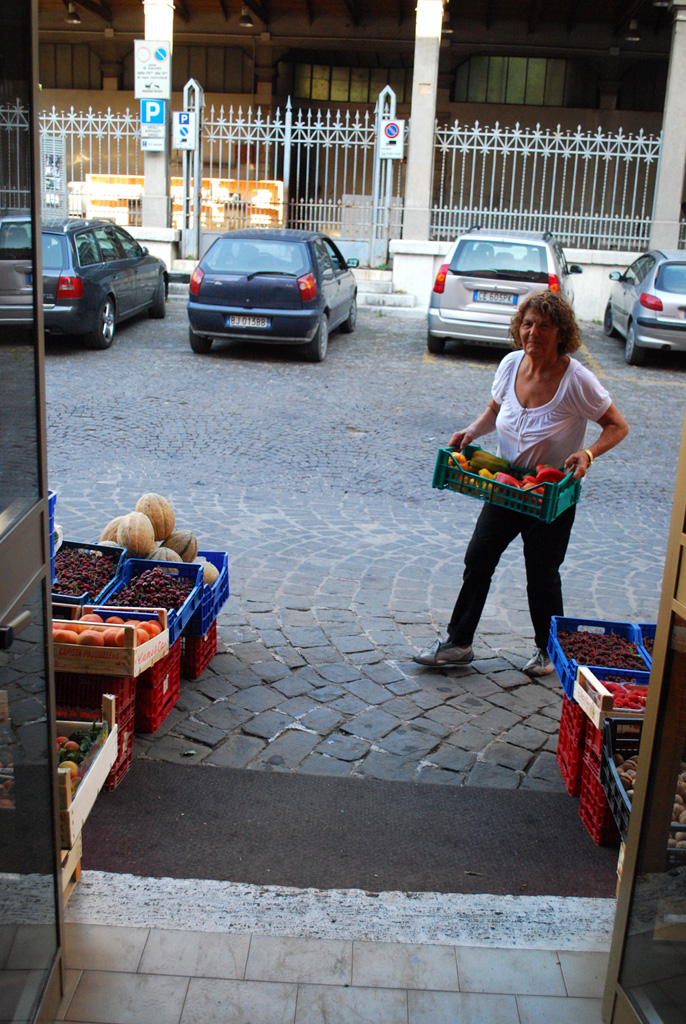 Carla Santini brings a crate of peppers into her fruit and vegetable market in Cagli Italy, June 20, 2013. Photo by Jacelyn Keys / Gonzaga in Cagli 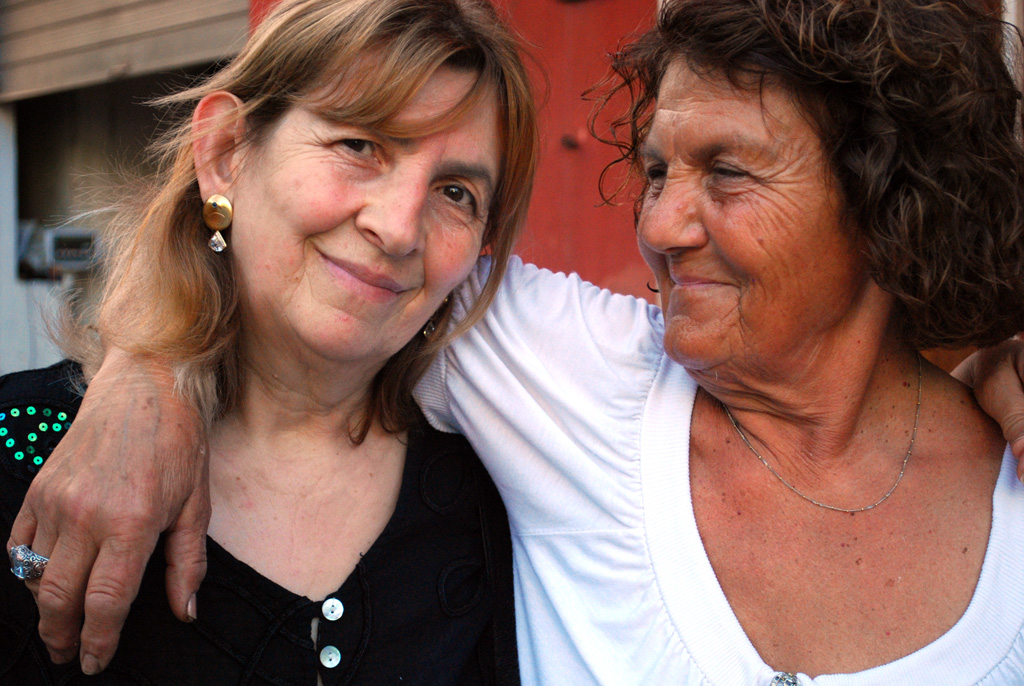 Carla Santini takes a moment to hug a friend and chat outside her fruit and vegetable stand in Cagli, Italy on june 20, 2013. Photo by Jacelyn Keys / Gonzga in Cagli

Massimo Pompili: The World Behind the Scenes 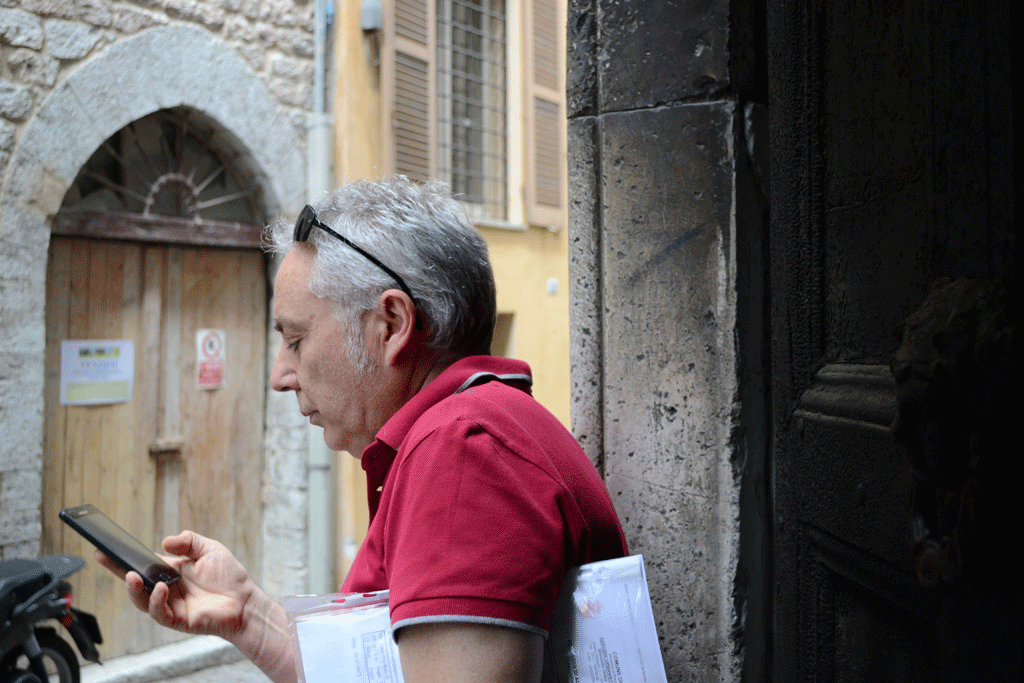 Construction spanned two years, and a single question became his company during coffee breaks. The question shadowed him each day as he walked along the cobblestone, and it stole hours of sleep from him at night. Would it actually work?

Massimo Pompili was implementing a new system to deliver water to the 15,000 people who live in his beloved city of Cagli, Italy. Massimo had designed pumps, aqueducts, and fountains, but the stakes for this project were especially high. Nowhere could he find an example of the same hydraulic engineering. So the question haunted him until the very end. Would it work?

It did. Engineers traveled hundreds of kilometers to see proof. Roosters announced daylight. A baker rinsed his pastry bowl on the north side of town. An elderly woman on the south side of Cagli stooped and placed her knobby hand on a garden spigot. The gush hit the bottom of her watering can with a familiar thud. The costs were moderate, and at last Massimo was free from the shadows of doubt.

As he steps into his office, Massimo notes the tasks flowing into his brimming inbox. He locates a sheet of paper in a plastic sleeve and, with unbroken concentration, walks quickly to a coffee shop. An espresso vanishes while he transcribes project specifications in a text message.

Whether the job is small or large — a broken window at a school or evaluation of a church’s aging foundation — Massimo is responsible for the maintenance and development of all municipal facilities. This includes roughly 300 kilometers of roadways, and his special interest, the 250,000 kilometers of water lines flowing through Cagli and beyond.

Massimo stands upon two massive cylindrical chambers tucked into the side of a mountain that protects Cagli. He listens to the hum of water pumps as he looks over the city’s terra-cotta roof tiles. Satisfied, he reviews the message traffic on his mobile device. Massimo drives up to Cagli’s first drinking water source, dating from pre-Roman origins of Cagli. Without this spring and the water it provides, he explains, there would be no Cagli.

From here, early dwellers collected and distributed fresh mountain water. They built roads and aqueducts, along with a series of lookout towers beyond the city’s inner defense walls. Trained pigeons flew from tower to tower with messages. Guards wafted smoke signals to warn citizens of impending danger.

Water sustains life, Massimo said. In his 32-year career in Cagli, he’s measured the city’s demand for water. While the population numbers are relatively static, the demand for water continues to inch upward. Another question nagged him. What if an earthquake hit? Was the city prepared to supply its most-basic need? Maybe not, he thought. So Massimo engineered and implemented an emergency water supply system at the edge of town to boost his city’s survival and recovery odds.

Massimo parks his car in the city’s central piazza, wasting no time in his exit. His path to City Hall is direct. A meter up a stone staircase, Massimo suddenly stops. The steps sag in the middle, but not from gravity. This is where people’s footsteps have actually worn through the stone over hundreds of years.

“I’ve taken my part of these steps,” says Massimo with a laugh as he points at the indentations.

Massimo passes the City Council chambers, where each year he presents a budget proposal. The budget details anticipate costs for new projects, scheduled maintenance and repairs across each facility, road, and waterline. Politics shift and times have changed, but Massimo strives to secure the money needed each time to preserve the city.

“My favorite part of this job is solving problems for the people of Cagli,” he says. Much like the water pressure exerted against the chambers of the city’s waterlines, the day’s tasks never slow or stop.

This doesn’t bother him. He began working at City Hall in April 1981, after his requisite year of military service and his university study of surveying. He was the youngest employee at the time but is now the oldest.

Like his water systems, Massimo is in a constant state of motion, planning for the future well-being of Cagli. He has no plans, however, to slow down. 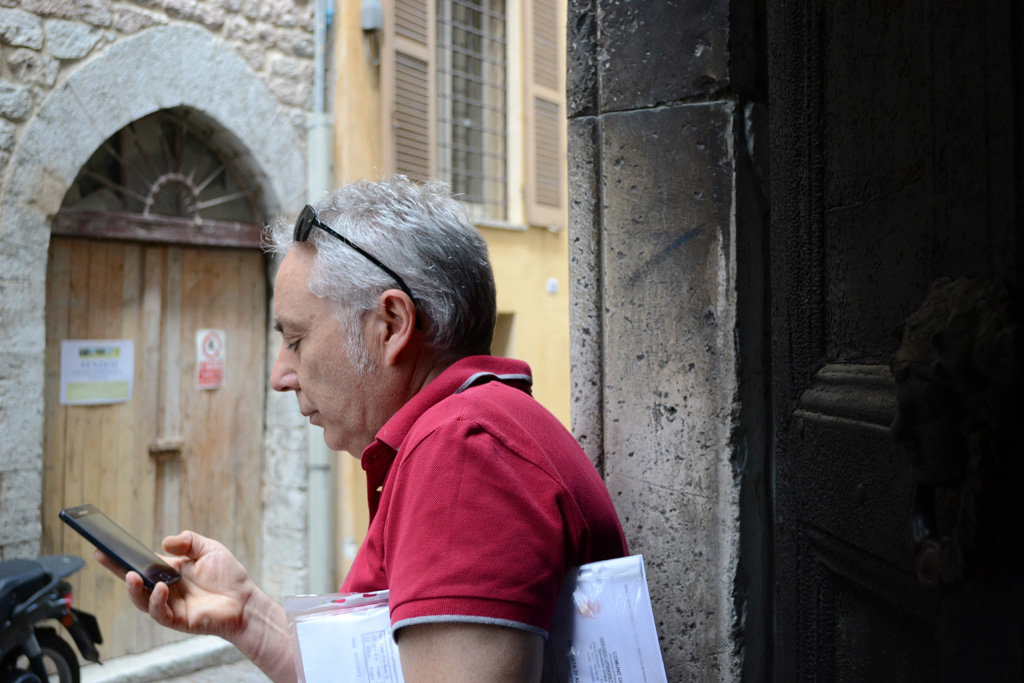 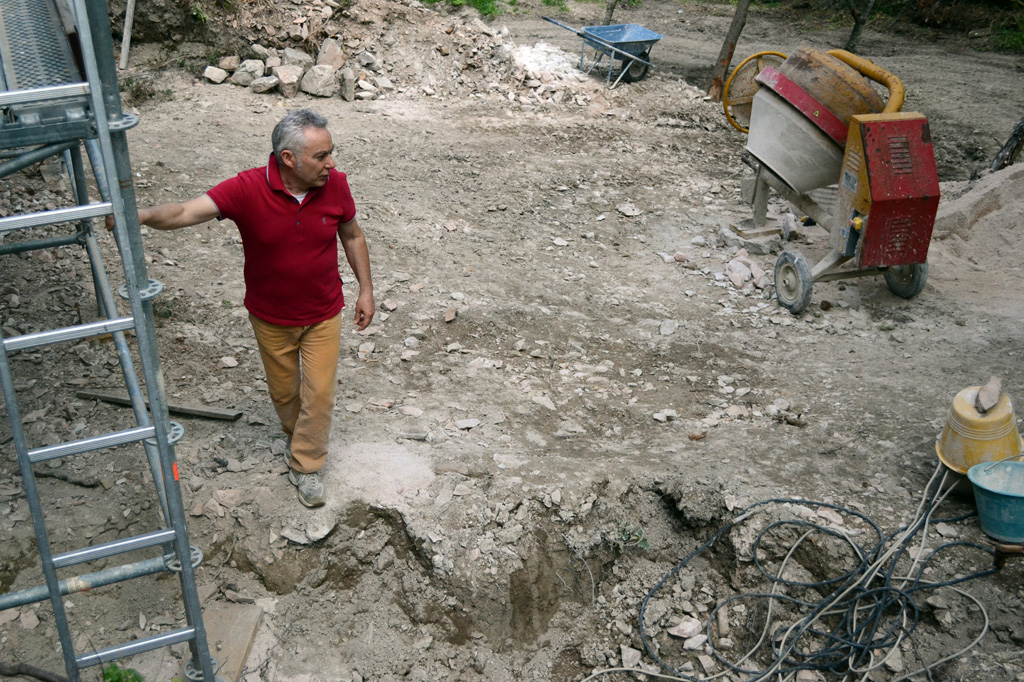 Massimo Pompili stands near the restoration site of one of the oldest structures in Cagli, Italy, at the base of Convento Cappuccini, July 6, 2013 (Photo by Agneta E. Murnan / Gonzaga in Cagli). 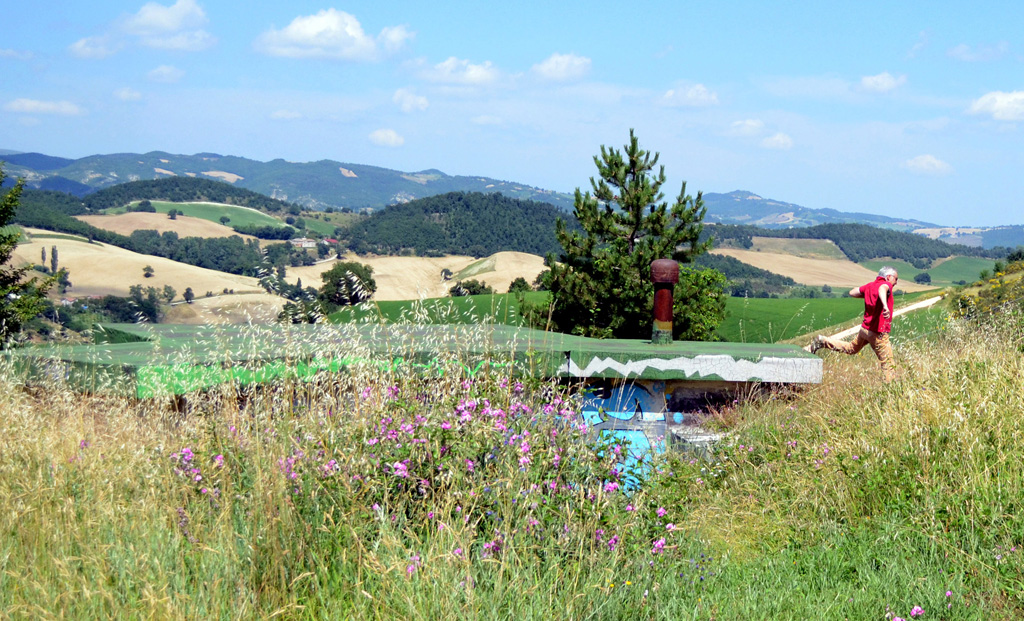 Massimo Pompili steps off the edge of a water control facility set into the hills of Cagli, Italy, July 6, 2013 (Photo by Agneta E. Murnan). 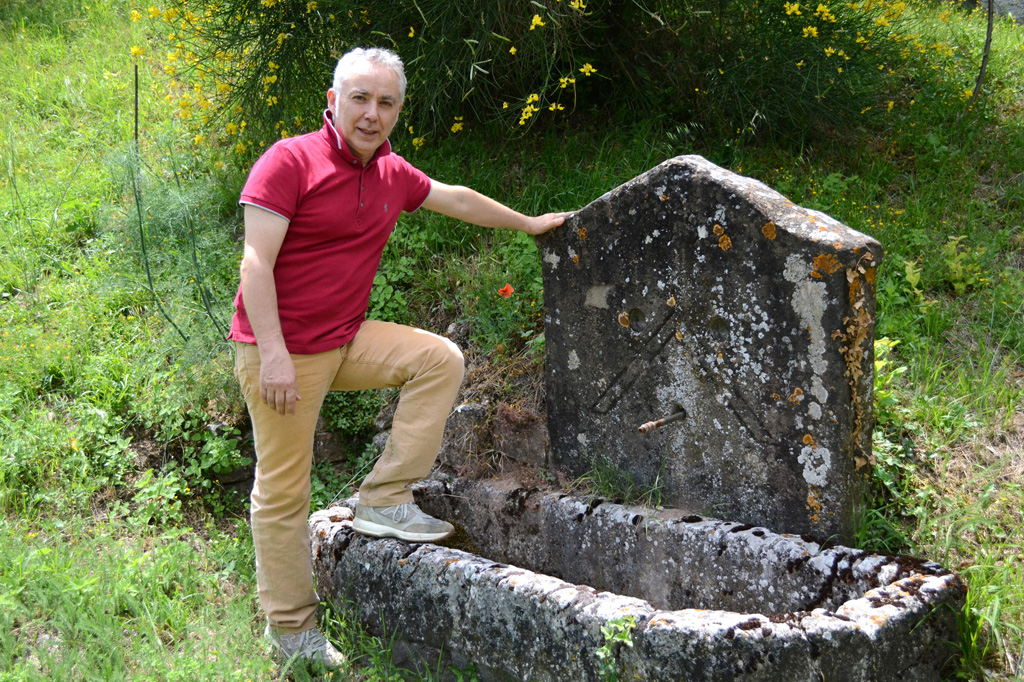 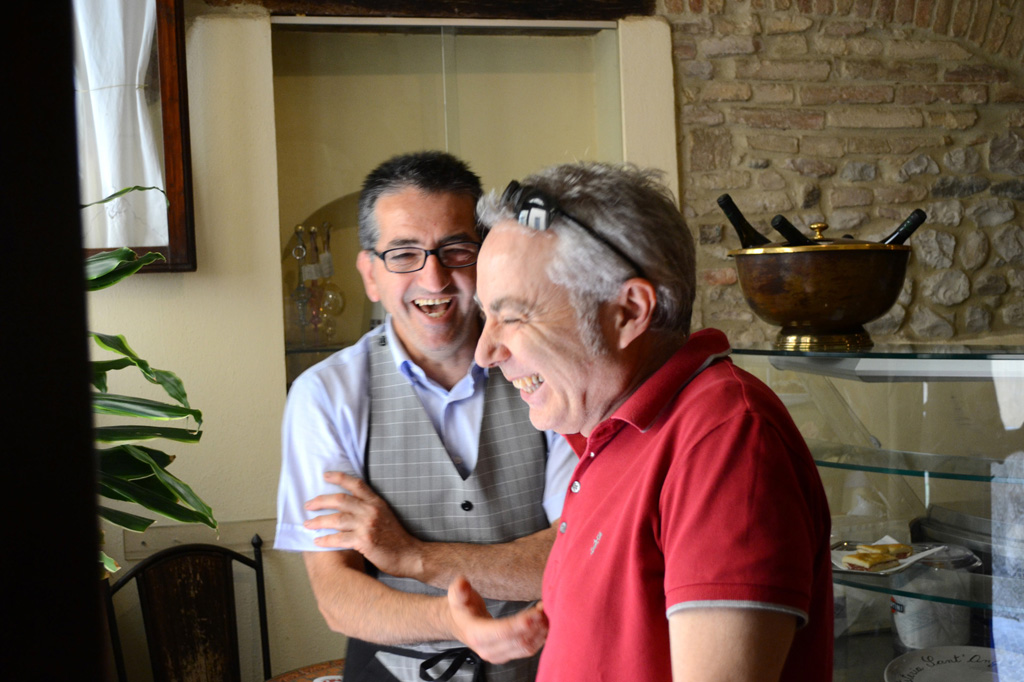 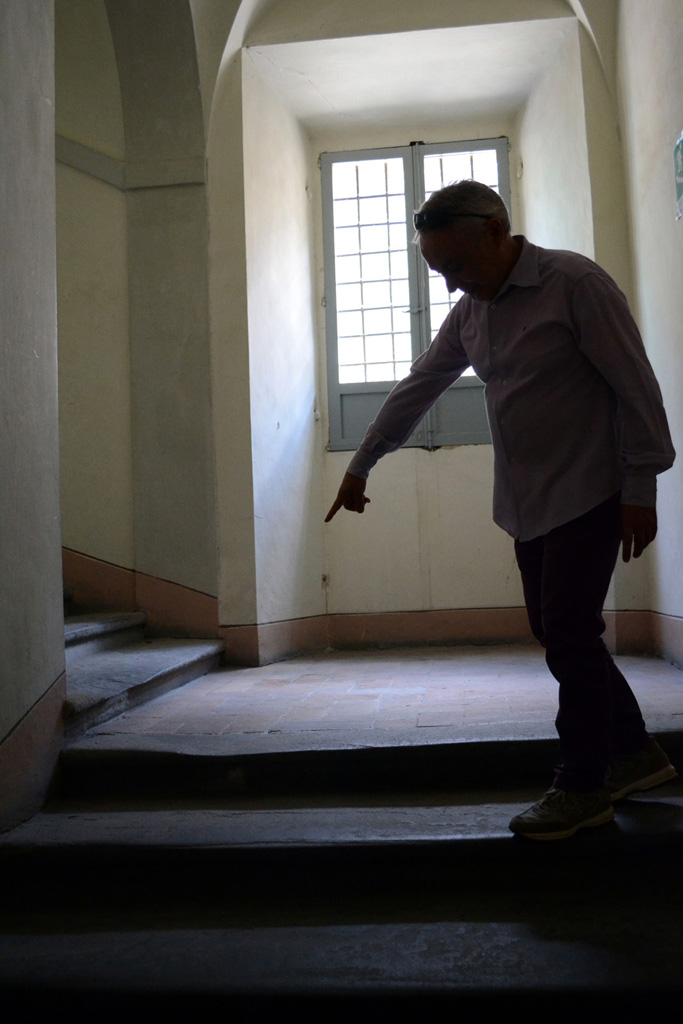 Massimo Pompili points to the indentation of stone steps in the Cagli, Italy, city hall, July 6, 2013. The steps have been worn low in spots by foot traffic over the course of centuries (Photo by Agneta E. Murnan / Gonzaga in Cagli). 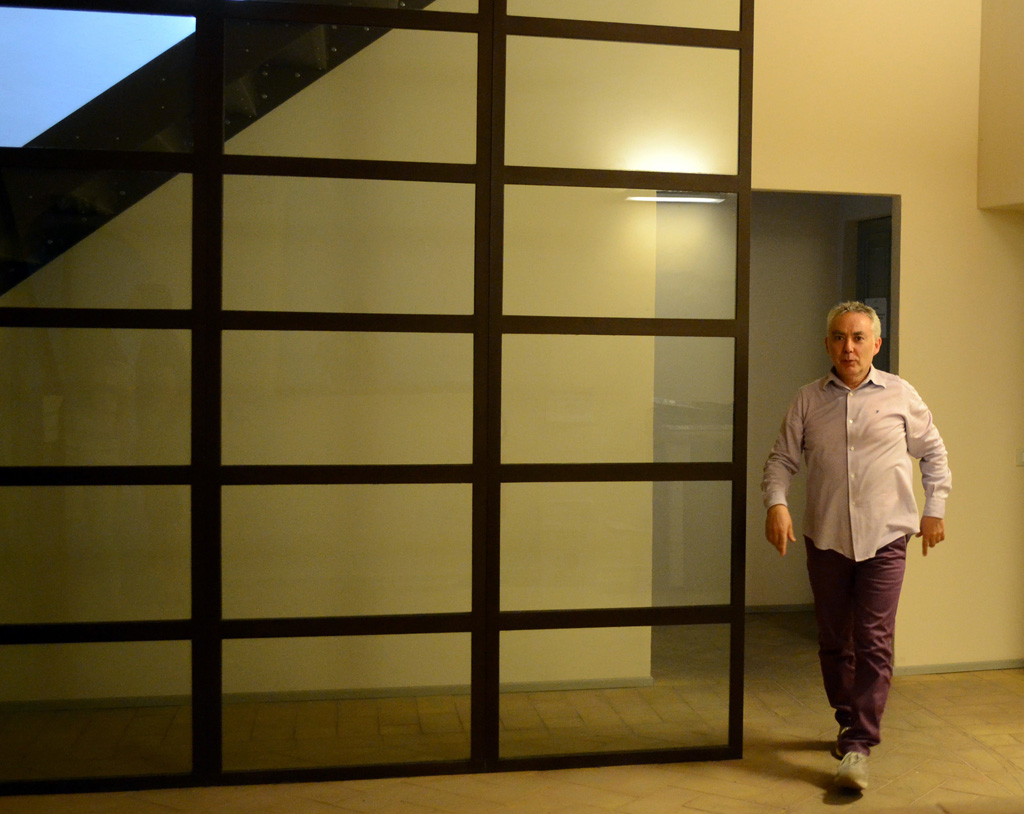 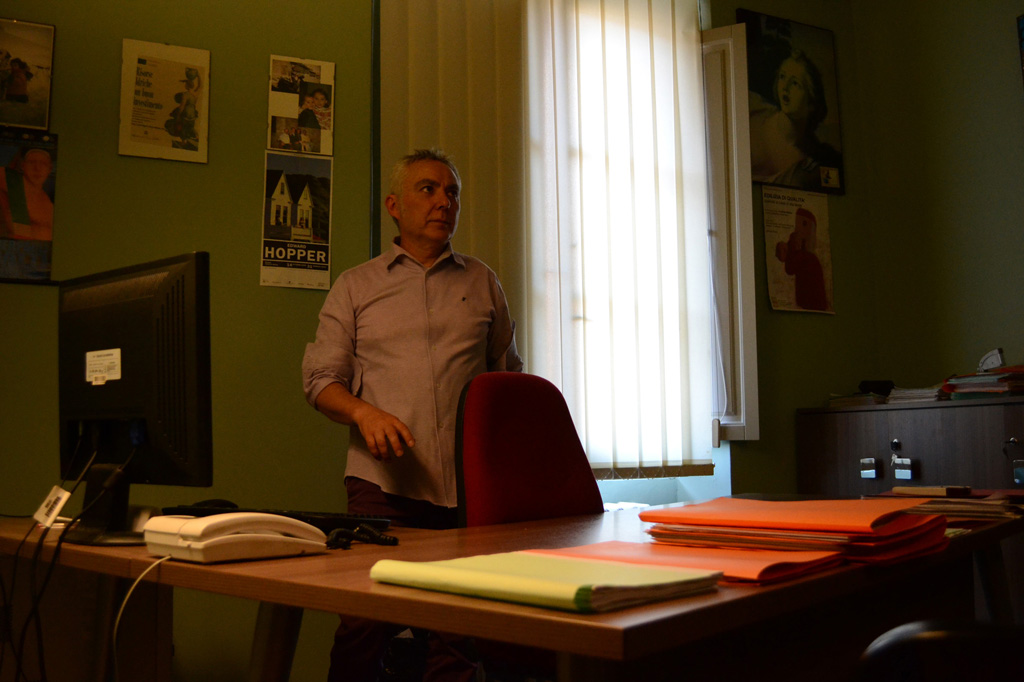 Massimo Pompili steps behind his desk in his office at the Cagli, Italy, city hall on July 4, 2013 (Photo by Agneta E. Murnan / Gonzaga in Cagli). 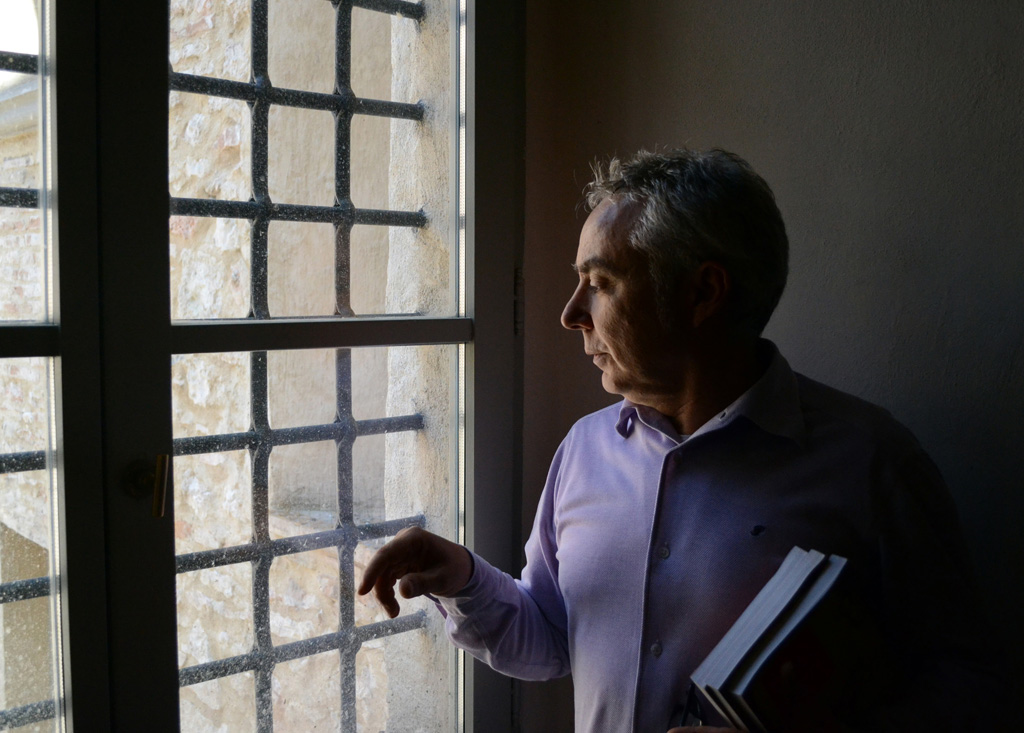 Massimo Pompili looks out from a window in the city hall of Cagli, Italy, July 4, 2013 (Photo by Agneta E. Murnan / Gonzaga in Cagli).